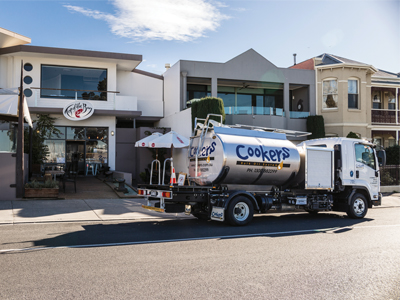 Oil – in all its forms, including vegetable – doesn’t have the best of reputations when it comes to sustainability and the environment. It takes a long time to break down, can have a disruptive impact on habitats, and can take on toxic forms once used.

With tens of thousands of eating establishments throughout Australia – all of which use one form or another of cooking oil – it is an issue that bulk oil specialist Cookers Bulk Oil knows all too well. When it comes to sustainability, traceability and how vegetable oil can affect its surrounds, the company has processes in place aimed at keeping the environment free from any negative outcomes caused by vegetable oils. National quality and safety manager for the company Hari Srinivas makes no apologies for the standards the company sets when it comes to where it sources its vegetable oil supplies.

“To deal with Cookers, you need to be an approved supplier, which means we look and see what sort of practices and standards you are following,” he said. “Suppliers need to meet minimum standards. And it means we don’t go to any supplier who hasn’t got a certification/traceability system in place that is not internationally recognised.”

He cites the Global Food Safety Initiative (GFSI), which is a private organisation, established and managed by the Consumer Goods Forum in Belgium. It maintains a scheme to benchmark food safety standards for manufacturers.

Certification can be achieved through a successful third-party audit by schemes recognised by the GFSI, including the BRC (British Retail Consortium) Global Standard for Food Safety Issue 8, IFS Food Version 6 and SQF Safe Quality Food Code 8th Edition to name a few.

“Without those types of certifications we don’t even entertain any supplier,” said Srinivas. “We are stringent with our suppliers. If you look into the way the industry is going now, the majority of the supply chains are going through some sort of certification system including HACCP. These sorts of certifications are one of the core fundamentals for traceability. The product could be coming from anywhere in the world nowadays. It may be via an underdeveloped country, a developing country or a developed county. Also, most of my customers whom I supply to have at least some food safety certification. Cookers ensures product integrity with no dilution as we provide Certificates of Analysis to meet specifications. ”

He said that although 99 per cent of the oil is refined locally, even the small amount of product they source from overseas has to have a certain standard of certification. This includes where the seed has been sourced, where it is crushed and even the batch number it came from.

“If they give us a batch number you can trace it back to the farm,” said Srinivas. “This is why farm to fork is the new mode that everybody follows, including us. We make sure we go back to the beginning and we use GSFI-certified refineries where they can trace backward from their end, too.”

Srinivas doesn’t want to tempt fate, but he is proud that the company has yet to have any of its products recalled. He puts it down to not only the standards it sets, but also compliant suppliers, and their own end users as well. This doesn’t mean the company is complacent. In fact, far from it. Frequently, they do an exercise where they have a mock recall, which involves checking its suppliers’ traceability to make sure they have the correct systems in place, and that they are working. This is because he knows that if there ever is a recall, they need to know where every drop of oil they have distributed has ended up. The good news for end users is that if that does happen, Cookers Bulk Oil will be able to trace the batch number and know where the offending product is very quickly through their centralised system.

Traceability is also key when it comes to dealing with customers in case things go wrong once the oil has been distributed. As mentioned, Cookers makes sure its customers also comply with standards and regulations, too. This is important to ensure customers are getting the product they paid according to specifications.

“We get audited every year, and our auditor checks things like how long it takes to check something, and the accuracy of our traceability,” said Srinivas. “If we have an issue we can compare it with the same batch delivered nationally to different customers,” said Srinivas. “We can get a sample and test it with same batches from other customers who have used the same batch.”

And the environmental side of the equation? Well, it is simple really: the customers who they supply their fresh oil to are also their used oil suppliers. The Cookers Bulk Oil truck fleet is divided into two types of vehicle. The stainless-steel trucks deliver fresh cooking oil, while the blue ones pick up the used product. Cookers not only supplies fresh oil and pick up used oil, it provides separate purpose built storage equipment used on-site by the customer, one for fresh and another for used oil. Not only does that help the customer, but it allows Cookers to make sure that they know what is happening with the oil.

“Once a customer uses the oil, we provide the equipment to transfer the used product into our on-site mobile storage units, which are emptied at regular intervals,” said Srinivas. “We get the oil back and we have got mechanisms to handle the oil in such a way it can go into biodiesel production. It means that with every drop of oil we sell, we make sure not a single drop goes into the drain.”

But what about the client? How does Cookers know that the amount of oil they delivered and collected is roughly the same? Sure some, might get absorbed into food, but there could be huge discrepancies between the amount delivered and what they pick up after use, right? Not so, said Srinivas.

“We measure UCO, which is collected,” he said. “We do all the calculations, so if there are any big variations, we will go and speak to the customer to see if there is anything going wrong and find whether we can help with oil management.”

He said another reason to use a company like Cookers Bulk Oil is that, due to its tanker delivery method, there are no empty oil tins heading to the local landfill. If a customer needed 100 litres of oil per week, that would usually consist of five 20-litre drums, which may end up in land fill. With Cookers’ tankers, the drums are redundant.

And where exactly does the company source it oils from? Srinivas is quick to point out that they don’t use palm oil, and their main oils are canola, sunflower and cottonseed.

“We get most of our oil in Australia, and over 90 per cent is refined in Australia,” he said. “For example, the canola oil we sell is 100 per cent Australian. Other oils, depending on the cropping situation, are imported in crude form from reputable suppliers who have proper certifications in place – usually from Argentina and European countries.”

At the end of the day, traceability is one of the key planks upon which Cookers Bulk Oil has built its reputation – thus the plethora of certifications and processes it has in place to make sure its meets its customers’ needs.

“The traceability is so important,” said Srinivas. “When you think about it, it is important in anything you do. If you are buying a piece of land you have to have documentation to see who the previous owner was, and the owner before them, and before them and so on. It is the same with anything that you are putting into your mouth, which is going to impact your health – we need to know the traceability and this is why we have these processes in place.”