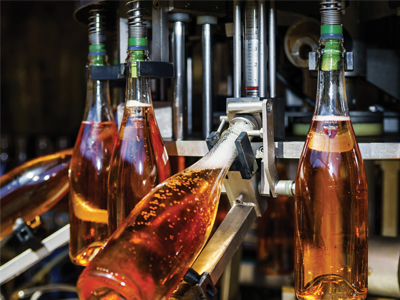 The main hero and villain in the wine-making process is oxygen. Generally, the use of various gases in wine production is necessary to negate the destructive nature of oxygen. Gavin Hall, Air Liquide’s sales representative for food and wine in South Australia, said this is where his company’s expertise comes to the fore.

“The management of oxygen in all the wine making processes is paramount to the industry,” he said. “This is because oxygen is what defines the quality of the wine and its organoleptic properties.”

Throughout the production process, the wine itself is subject to various oxidation processes. A certain degree of oxidation is necessary, but direct contact with oxygen has a detrimental effect on the quality of the final product. It is possible to control how oxygen interacts with the wine by using a variety of different gases. All wineries have to use gases to control the intake of oxygen. These gases include nitrogen, carbon dioxide (CO2) argon and sulphur dioxide.

Hall said there are eight stages in which gases are involved in the processing of wine.

In this stage CO2 is mainly used in the form of dry ice. “In Australia, compared to Europe, most wineries don’t use this cooling process due to the initial phase, they usually try to process the grapes as soon as possible,” said Hall.

Stage 2
Once the grapes are crushed, the pressing process allows for the production of clarified juice, which is transferred to different tanks to ferment. Winemakers need to displace the air from empty vessels into empty pipes before transferring the wine to ensure there is no residual oxygen. This is called purging.

“When you need to purge the tank,” said Hall, “you utilise an inert gas to flush out the remaining liquid or air under a certain pressure.”

Nitrogen is mainly used in this stage. The process of purging is done by building slight overpressure with nitrogen in the tank, or in the pipeline. The wine maker is stopping the oxygen from coming in contact with the grape juice that has just been crushed out of the grapes.

“You are basically displacing the oxygen from the air that has already come in contact with the juice,” said Hall. “You’re using nitrogen under pressure to purge and transfer juice within the tanks.”

Stage 3
Then comes what is called tank inerting. This encompasses blanketing the surface of the wine tank after the juice has been collected.

“You are blanketing the surface with a protective layer of gas during the storage, or when you are emptying the tank,” said Hall. “By doing this to the tank, you prevent oxidation.”
The gas used can be nitrogen, CO2, or a mixture of the two. Vintners can also use argon, but that can be a little more expensive. In Australia, tank inerting is very important, and it is common to do it with dry ice.

“Using dry ice is preferred by winemakers because it’s practical, and they can actually see it and it’s a bit cheaper,” said Hall.

“You scoop it into the wine tank. Because CO2 is heavier than air, it creates a layer at the bottom of the tank blanketing the wine, thus preventing oxygen contact.”

Stage 4
Winemakers are constantly measuring the dissolved oxygen in the wine. Depending on the wine being made, some vintners do what is called deoxygenation which consists of stripping out the excess oxygen that is dissolved in the wine.
“For this process you would use nitrogen,” said Hall. “By injecting nitrogen in the form of tiny bubbles into the wine, you are forcing the dissolved oxygen into the gas phase, and then the gas is vented out of the tank.”

Depending on the type of wine that is made, vintners need a certain amount of dissolved oxygen. It is one of the key criteria to produce quality wine.

Step 5
The next step, also using nitrogen, consists of mixing or homogenising. Nitrogen is bubbled at the bottom of the tank. When the bubbles raise to the surface, they are mixing the various products together.

“That is why it is called mixing,” said Hall. “This comes into effect when wine makers need to homogenise the wine they are making. It avoids oxygen pick up.”

Bubbling nitrogen is also used during must lifting process but this time during the fermentation. This process brings up all the dense solids that have accumulated at the bottom of the tank.

The benefit of must lifting using gas is that it saves times.

Step 6
Bottle inerting is the next step. This means that when the wine is being bottled, gas is already being used. Like most of the other steps, it is all about minimising the amount of oxygen in the wine.

For this step, it is possible to use CO2 or nitrogen, or a mixture of both. Every bottling line in a winery has filling machines equipped with gas injection. The decision on what type of gas is to be used depends on the type of wine that is being made.

“Most winemakers use nitrogen to apply counter pressure in the bottles to purge the oxygen before filling them with wine,” said Hall. “The oxygen is eliminated inside the bottle, then you fill them with wine.”

Step 7
Depending on the wine and oxygen level of the tank, some winemakers might use oxygen in the different steps of the winemaking process. This is called oxygen enrichment.
“The winemaker reintroduces oxygen to help maintain the yeast activity in the wine to minimise the risk of stuck fermentation and the production of undesirable sulphides,” said Hall. “Oxygen is not always bad in the winemaking process. This is a controlled situation. You’re not putting wine in contact with air, you’re injecting oxygen in micro doses. The yeast works on oxygen. The simple process of wine making is that you have the sugars in the grapes and then the sugars become alcohol, or ethanol in this case. This process is using oxygen to transform the sugars into ethanol. What you don’t want to do, is put in too much oxygen. Then the alcohol becomes oxidised. You need to control the amount of oxygen you put in the wine.”

Step 8
In the case of still wines, the CO2 level is usually adjusted before bottling, according to Hall. Winemakers can measure the level of CO2 that is dissolved in the wine and bubble nitrogen if it is too high or dissolve CO2 if it is too low. In the case of sparkling, this adjustment is brought about to carbonisation of the wine.

“Now you have the wine that is ready,” said Hall. “Oxygen is the one that creates the magic. It is the management of oxygen that is important and you need it to be controlled at all steps of the process. It is a critical thing for winemakers. An excess of oxygen is bad. You want to avoid direct contact with air.”

If winemakers are thinking of using the gas suite offered by Air Liquide, they come in three different modalities.

For small wineries they come in gas cylinders. For medium- to large-sized installations, the gases are supplied in bulk via big tanks. For big wineries, Air Liquide can install and operate a nitrogen generator onsite.