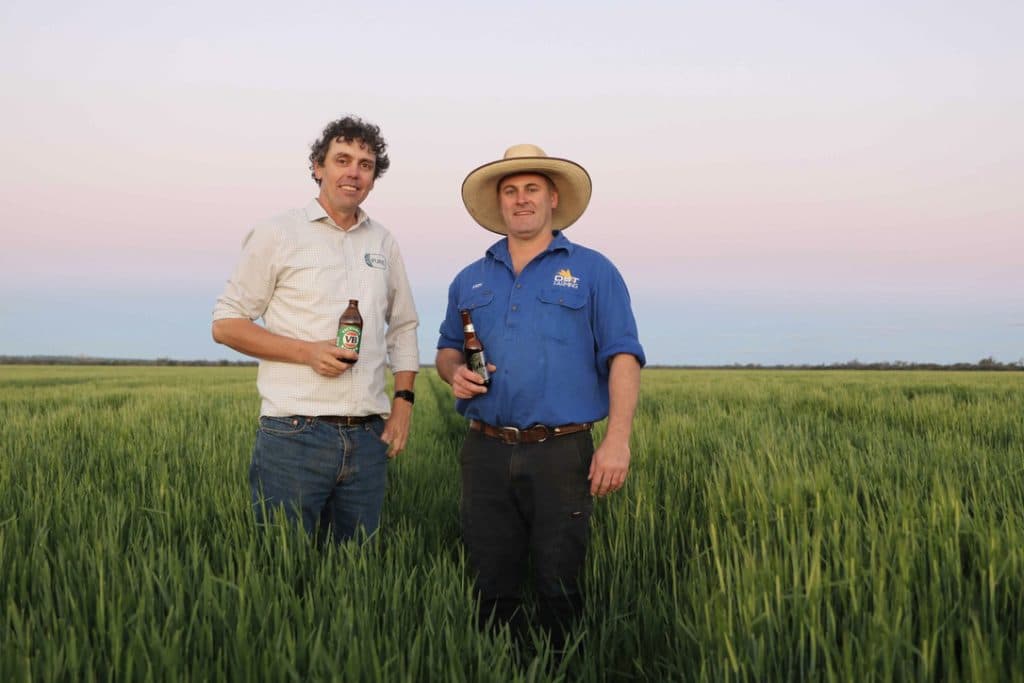 Australia’s largest brewery at Yatala in Queensland, owned by Asahi Beverages through Carlton & United Breweries, is now brewing beer with barley that’s traceable back to its farm of origin, as part of a new deal with Australian growers.

Under the old model, farmers sold their grain to bulk handlers who stored it all together, meaning the barley used for brewing was potentially from hundreds of different farms.

Asahi Beverages has now removed the bulk handlers from the barley supply chain – allowing brewers to work directly with growers to select and perfect barley types.

The move means Asahi Beverages will now buy up to 40,000 tonnes of barley directly from NSW every year to supply the Yatala brewery.

The direct purchase agreement allowed Asahi Beverages to trace its grain back to the farm where it was grown, Yatala’s brewing manager Garry Menz said.

“Our brewing team can now track the barley from NSW farms while ensuring farmers get additional payments that otherwise would have gone to the bulk handlers,” Menz said.

“This allows Asahi to secure a direct supply chain for one of our most important ingredients and allows us to trace how the barley will perform. We can monitor farming processes and our long-term commitment gives each grower the confidence and financial security to invest in new technology and make improvements in farming sustainability and efficiency. This is collaborative cultivation and food production at its best.”

Seven NSW farmers have joined the program, with more expected to join next year.

North Star farmer Andrew Ostwald has signed up and his barley is now earmarked for use in one of Australia’s most popular beers.

“The barley from my property will be used to brew Victoria Bitter that’s enjoyed across Queensland and beyond,” Ostwald said.

“The opportunity to tap into a direct deal with a brewing giant such as Asahi Beverages is an enormous leg up for Australian barley growers. By simply removing a layer between the grower and the brewer, we can then invest the financial gain into the long-term partnership with Asahi.

“We’re now in the unique position to afford and plan upgrades to technology, machinery and people. This deal puts growers back in the driver’s seat, allowing us to do what we do best – grow great barley! You can guess what beer I’ve now got in the fridge!” he said.

The new deal includes monitoring of agricultural inputs such as water usage to help Asahi Beverages achieve its sustainability targets. It is also running with Victorian farmers at the Abbotsford Brewery in Melbourne, with more than 90 per cent of Asahi Beverages’ barley now purchased direct from Australian farmers. There are also plans to expand the program to Asahi Beverages’ smaller breweries, such as Cascade in Hobart.

“Our relationship across the brewing industry from farmer, maltster and brewer is unique within the Australian grains industry,” PURE Grain Network CEO Stuart Tighe said.

“An agreement such as this creates a more resilient farming process. By working with Asahi Beverages, we can improve farming productivity and lessen environmental impacts. It’s a significant shot in the arm for the regional communities our growers operate in.

“It’s a win-win. Grain growers get the additional income that would otherwise have gone to the bulk handlers and Asahi Beverages gets clear sight of the growing process to ensure only the best, sustainably grown barley is used.”

Barley is one of four key ingredients needed to make beer and influences its taste, colour, aroma and foam.

“It’s the heart and soul of beer,” Menz said.

“Every time you twist the cap on a VB, we want Australians to think of growers like Andrew and raise a glass to all the Aussie barley farmers.”