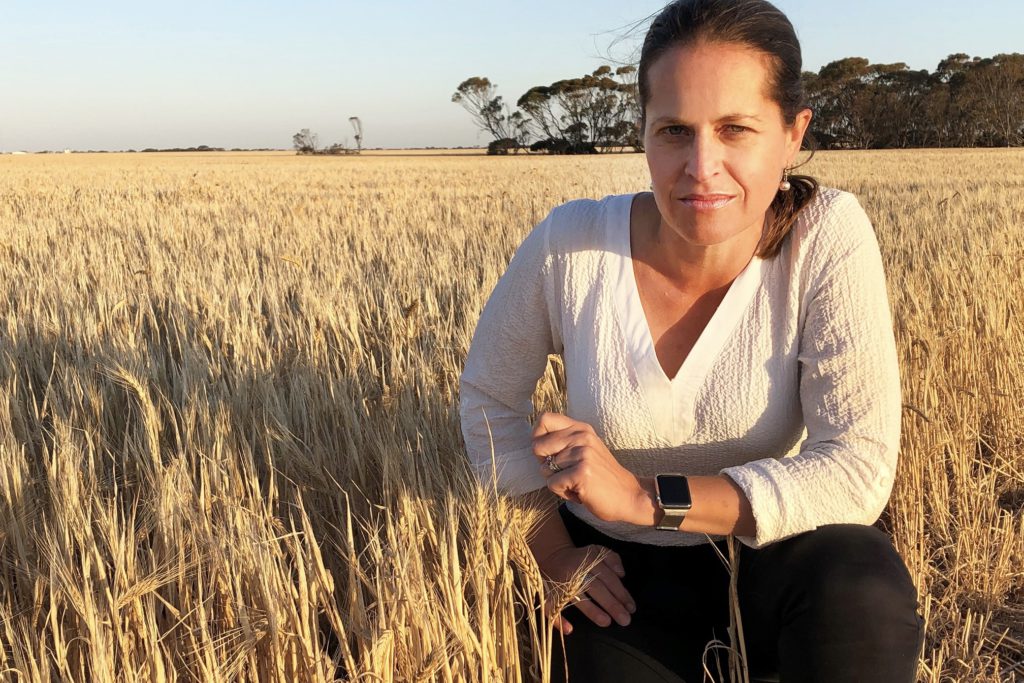 In its flagship annual Australian Agribusiness Outlook for 2022, titled “Making Hay While the Sun Shines,” Rabobank stated that the Australian agriculture sector is set for another profitable year ahead, with the gross value of agricultural production on track for a fourth consecutive year of growth in 2021/22.

“Australia’s second year of great pricing and mostly exceptional production conditions in 2021 means the Australian agriculture industry is well placed to take on the challenges of 2022. More importantly, it means the industry can prepare for the time when the sun is not shining so brightly in its favour,” the report said.

RaboResearch senior commodities analyst, Cheryl Kalisch Gordon, said while there will be some pressure on farming margins in 2022 compared with 2021 – with some heat forecast to come out of a range of commodity prices, a mixed production outlook and supply chain challenges – another favourable year was expected for Australian agriculture.

According to the report, local macro-economic settings also remain supportive for Australian agriculture: “In particular, we expect the Australian dollar to only gain a little over the year and remain near its five-year average.”

As a “once in a blue moon” year for Australia’s agricultural sector, 2021 delivered very strong prices resulting from global hardship, coinciding with favourable Australian production conditions.

“There was a combination of drought and adverse weather in key cropping regions around the world, strong stockpiling demand in the face of potential food shortages along with Covid-induced labour shortages which impacted intensively-produced agriproducts and transport,” Gordon said.

“This delivered clouds to agriculture sectors in many regions of the world and a silver lining for Australian agriculture. This second straight year of increasing commodity prices coincided with again favourable to very-favourable Australian production conditions. And for those commodity sectors where production has been lower, high pricing still delivered strongly profitable positions.”

While the outlook for 2022 is also positive, RaboBank expects the year ahead will bring “less pronounced opportunities” for Australian agriculture.

“We start 2022 with the Australian food supply chain under unprecedented pressure, supply chain disruption and bottlenecks being felt across the board – from access to inputs at the farm level through to consumers accessing food on supermarket shelves,” Gordon said.

The impacts on supply chains are expected to linger at least through the first quarter of the year.

“We also expect some of the heat to come out of prices for a number of commodities in 2022 as supplies are renewed globally, stock levels are increased and demand tempers,” she said. “However, we expect prices to remain at levels above the five-year average for our main agricultural commodities.”

For Australia’s agriculture production, the outlook is mixed, coming off the high base of 2021 volumes.

“Very favourable seasonal conditions in 2021 – and in some cases record rainfall – have provided a beneficial start to 2022 for cropping and pasture prospects, due to good soil moisture,” Gordon said.

“That said, at this point, we can’t expect a repeat of the record grain and oilseed harvest we’ve seen for the 2021/22 season. Although for livestock, we do expect year-on-year lifts in slaughter numbers for both cattle and sheep, given the extended period of good seasonal conditions we’ve seen in most regions that have enabled some rebuilding of stock numbers.”

Milk production was also likely to lift, but only in the second half of the year, the report said, while 2022 cotton production was on track to continue rising, to see an 85 per cent increase on last year.

While 2021 had its share of challenges, 2022 will also bring some headwinds for Australia’s agricultural sector, the report said.

This will include the ongoing impacts of COVID-19, as the world grapples with the Omicron surge and “the prospect of Rho, Sigma or Tau delivering the next blow.” 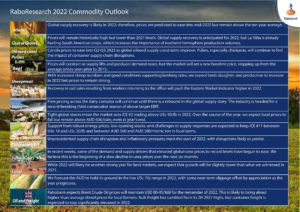 Another aspect is the pervasive challenge of inflation, which continues on one of the steepest rises in 30 years, Gordon said.

“Additionally, we expect there will be global policy tightening around economic stimulus measures that have been in place during the pandemic, which will be designed to moderate demand,” she said.

“Getting the policy settings on reducing stimulus and managing inflation will be critical to maintaining economic growth and consumer demand in many economies, and failure to get this right could curb demand in some of our markets for some, especially more discretionary, purchases.”

“Dry bulk freight rates have fallen considerably from their 11-year highs in 2021, but still remain elevated on several routes,” Gordon said. “Container rates remain near their recent record highs, and we expect global trade to continue to be impacted by issues, especially relating to boxed freight, in 2022.”

In terms of geopolitical considerations, the tight global market for agricultural commodities had shielded Australia from the impact of losing China as a buyer in 2021.

“However, as markets unwind, we expect Australia may need to work harder on diversifying into alternative destinations,” Gordon said.

Meanwhile, there is also the potential for market fallout from current tensions between Russia and Ukraine, which could “deliver exaggerated volatility in markets ranging from wheat through to oil and fertiliser,” according to the report.

Other challenges ahead included still-high farm input prices (albeit easing somewhat in the second half of the year) and ongoing labour shortages.

The report said that with Australian agriculture positioned for another positive year ahead, it presents an ideal opportunity for the sector to prepare for future times when “the sun is not shining so brightly in its favour.”

According to Gordon, this included preparing for an increase in margin pressures (when global prices decline and Australian farm returns come under pressure), diversifying markets and trading relationships, and equipping farm businesses for future droughts and climate change.