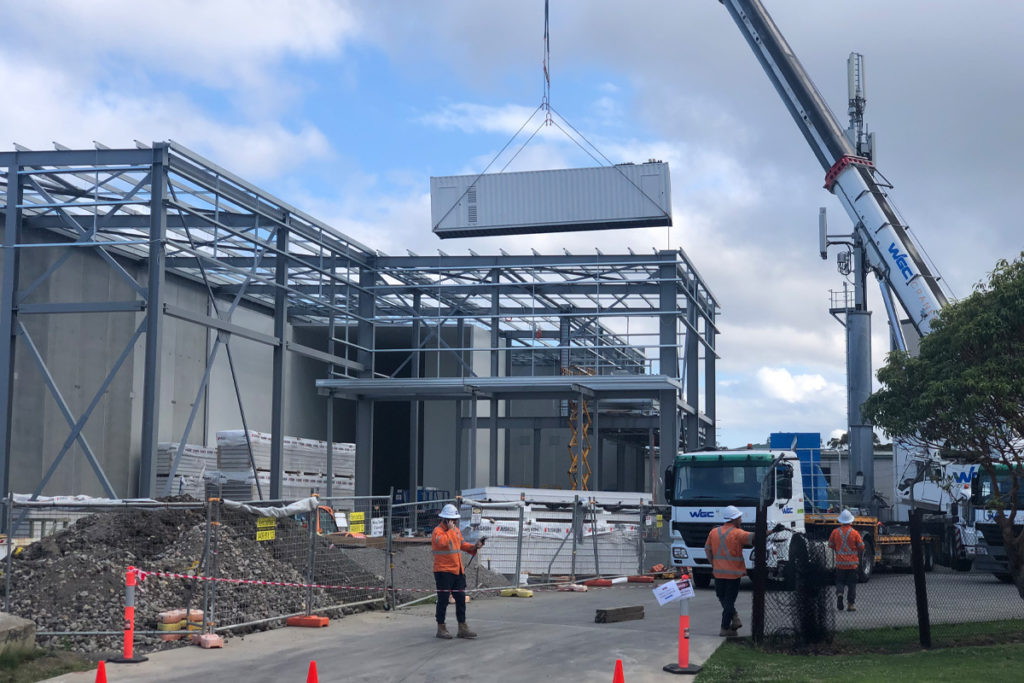 Rob Blythman shares the journey of Total Construction during the assembly of Illawarra Smallgoods’ auto freezer and explains how automation of the cold chain is lowering production costs.

Having undergone sustained growth over a prolonged period of time, Illawarra Smallgoods developed a need for more onsite storage amidst tight space restrictions. Although the onset of COVID 19 resulted in a significant reduction in trade, Illawarra remained positive about the future and decided to press on with the expansion.

The solution it settled on was an Automatic Storage & Retrieval System (ASRS) freezer: a high-tech freezer containing automated “shuttles” that could deposit, retrieve and automatically organise the packaged meat pallets. This was possible from outside the freezer, with low labour costs involved and no need for human intervention within the freezer.

“The ASRS freezer was an extension to their existing facility,” said Rob Blythman, general manager of the engineering construction group Total Construction.

“It’s got automatic “Shuttle Movers” on each racking level that handle the pallets of meat. The freezer is five racks high and the shuttles automatically store and retrieve the pallets from wherever they have to be retrieved from, using QR codes to identify their locations”.

Illawarra Meats had decided to digitalise its cold chain process for a number of logistical reasons.

“To put in a manually operated freezer, over the long term, would cost them a lot more money in ongoing operations costs (people),” said Blythman.

“One of the most expensive things in Australia is labour. It’s not systems or equipment, its labour. To have to employ another five or six logistics people inside the business, just didn’t equate for the amount of growth in business. They still needed the capacity, which is why they decided to do this.”

According to Blythman, the costs would pay itself off in the following years. He said it will cost them a bit more upfront now, but over the next five or 10 years the company will recoup those costs. Labour costs are ongoing and are never fully recouped, he said. He also pointed out that digitalisation isn’t just about labour costs though.

“It also reduces power costs. Once that freezer’s operational, those doors are open for far less time than a traditional freezer, so you don’t lose anywhere near the amount of cold air or introduce large volumes of moisture, removing the need for extensive defrosting. To keep that freezer at -18°C ends up costing you less in power, it’s far more efficient,” Blythman said.

While the ASRS freezer system was designed overseas, it required a level of local skill to build the building housing it and to install and set everything up.

Started in 1994, Total Construction has 25 years of experience under its belt, along with a recent 2020 award for the Excellence in Construction. It was able to build the ASRS freezer with specific budget limits and requirements to automate Illawarra Smallgoods’ refrigeration system.

“You’ve really got to work hand in hand with the automation and refrigeration people to do that and that’s really where the cooperation comes in. Traditionally an ASRS freezer was quite expensive and mainly the domain of the larger F&B players, now it’s quite reasonable cost wise. “Small to medium operations can now afford to put these systems in,” he said.

Early in the project trouble struck; it is the threat to feasibility that every construction company dreads – the project team found asbestos in the ground, which was from decades ago. The owner didn’t know about, no one knew about it. And once it was detected by the Total Construction team, it had to be removed.

Despite the impacts on the costs and feasibility of the project, Illawarra Smallgoods decided to push through with the long-term gains outweighing the short-term costs.

“It took us about four to five weeks to remove and we had to take off 1.2 metres of dirt across the whole site and dump it at an asbestos facility,” said Blythman.

Illawarra Smallgoods isn’t the only company jumping at the chance to automate.

“I think a lot of players in the market have been holding off for the last six to eight months on doing any expansion works. We found that in November to December last year, a lot of buttons got pushed to go: to start designing, to start works and get the ball rolling,” said Blythman.

“For the food and beverage sector, a lot of companies are starting to reinvest money at a fast rate. It’s like they have six to eight months’ worth of work to catch up on, so a lot of projects are really steaming forward, and I think what you’re going to find is that same argument: it’s about saving on labour costs in operations.

“The food and beverage industry needs to automate as much as they can throughout their facilities and I think over the next 12 to 18 months you’re going to see a lot of that coming to the fore, whether it’ll be automated production lines, as well as automated storage freezers. Everything and anything that can be automated, they will try to implement because it’s products that’s actually making you money, not labour,” said Blythman.

“They know the demands out there for their products and its only increasing – they are all seeing a boom coming in Australian-made food and beverage and they want to be ready.”