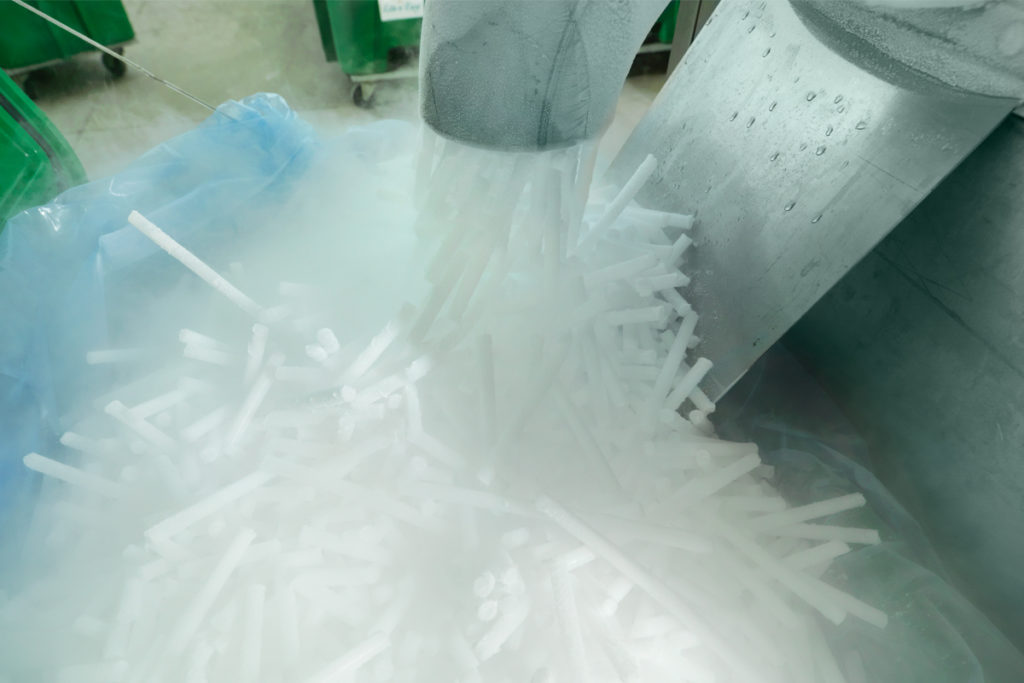 Created in the 1960’s, Supagas is a supplier of gases in Australia and also a subsidiary of the fourth largest gas supplier in the world, Tayo Nippon Sanso Corporations (TNSC). This gas company initially started manufacturing dry ice in 2005, but while dry ice might seem an obvious product stream for the company, it wasn’t always this way.

“Back then, the people in the company weren’t really sure how dry ice was going to be used and how much was going to be sold; it had a very limited shelf life. It was pretty much a leap of faith to enter into that market, and the vindicating factor is that it’s still going strong and continuing to grow for Supagas today,” said David Petroff.

Since then, demand for dry ice, especially as part of the cold chain, has been rapidly growing.

“It’s an extremely versatile product. It allows you some way of clean, temporary and portable refrigeration, (because) that’s what dry ice is all about,” said Petroff.

The quality for dry ice depends on where the carbon dioxide is acquired. The carbon dioxide is taken from its production plant and transported to where the dry ice machines are located; from there, these machines have the capability to make dry ice in the form of pellets, slices or blocks that are either extruded or moulded depending on which type is being made.

“Some examples are meat processers,” said Petroff. “They hang the carcasses and slice and dice them, but there’s a period of time in between when they actually produce the cuts, to when it arrives at the retailer where it needs to remain below a certain temperature. They put it (dry ice) in bins with meat after it has been cut. The dry ice used in this example is the smaller pellets or snowing with dry ice.

Then there are the dry ice slices. According to Petroff, there is a whole dry ice industry based around the airline catering business. He cites the trolley-cars pushed on airplanes.

“They will use slices of dry ice in the carts they push up the aisle. When you get your fresh roll or drink and you’re wondering ‘Why is this cool?’ it’s because of dry ice in a hidden compartment up the top of the trolley-car,” he said.

Dry ice’s temperature usually sits around -78˚C and works as a heat exchanger, with no mess. Since carbon dioxide weighs 1.5 times heavier than air, during the sublimation process where carbon dioxide turns to gas, the cold carbon dioxide gas will drift down.

“When it’s turning from carbon dioxide to gas, that heavy gas is going down inside the cart and cooling it down,” Petroff said.

Finally, blocks of dry ice are used in the freight forwarding industry. Perishable foods and pre-packaged and frozen meals all utilise this form of dry ice.

“For example, all over Australia there’s producers who grow oranges, they catch lobsters, and they catch fish: these go all over domestically and overseas,” explained Petroff. “They get all these perishable products into their refrigerated warehouses then they need to be able to move them to all parts of Australia and also overseas. They don’t always have refrigerated transport, so they rely on dry ice to provide the mobile kind of portable refrigeration.”

Petroff said. “Quite often it’s put into a foam box or esky and kept cold by dry ice – it’s portable. Its portability is one of its attractions.”

Once perishables are in the warehouse they will have a shortened lifespan if it doesn’t have some form of refrigeration.

Dry ice can last anywhere from one to seven days. “It is a temporary product and a temporary way of keeping things cold,” said Petroff.

“One of the main benefits of dry ice, when its making things cold, is that it’s not turning into water – its turning into a gas, so it leaves no mess behind,” said Petroff.

“They use our dry ice. The main reason they use it is because the dry ice gives superior longevity and ice cooling capacity compared to frozen gel packs. And nothing comes back. However, in a box with frozen gel packs, the problem is the gel packs are still there when they’ve melted,” said Petroff. “So, it’s not quite as nice in terms of the environment.”

Dry ice turning to gas instead of liquid once it deteriorates is not the only feature of the product. It also has around double the refrigeration capacity of traditional water-ice and has a “one-way ability” with no mess as Petroff calls it.

Businesses also utilise Supagas’s dry ice in the rapid cooling of the foods and preservation process of the cold chain, such as in ‘Ready to eat meals’.

“Meals are rapidly cooled using dry ice; it then it goes into refrigeration,” said Petroff. “This locks in the flavour and the goodness of the food by making it cool really fast.

Dry ice really is the unsung hero of the cold chain process, according to Petroff.

“The people who use it are mainly the ones behind the scenes. When we look at supermarket freezers and when we buy foods, we’re not generally exposed to dry ice,” he said. “It’s a lot of people behind the scenes, like those who deal with frozen meals or perishable foods or meals that need to be transported to rural areas of Australia that use it, even the people that buy the foods don’t really see it.”

With dry ice functioning in so many parts of the supply chain, not only for food, but for preservation of beverages too, Petroff is confident in the demand for dry ice will continue to grow.

“I see a future in dry ice – it is not going away quickly,” said Petroff.