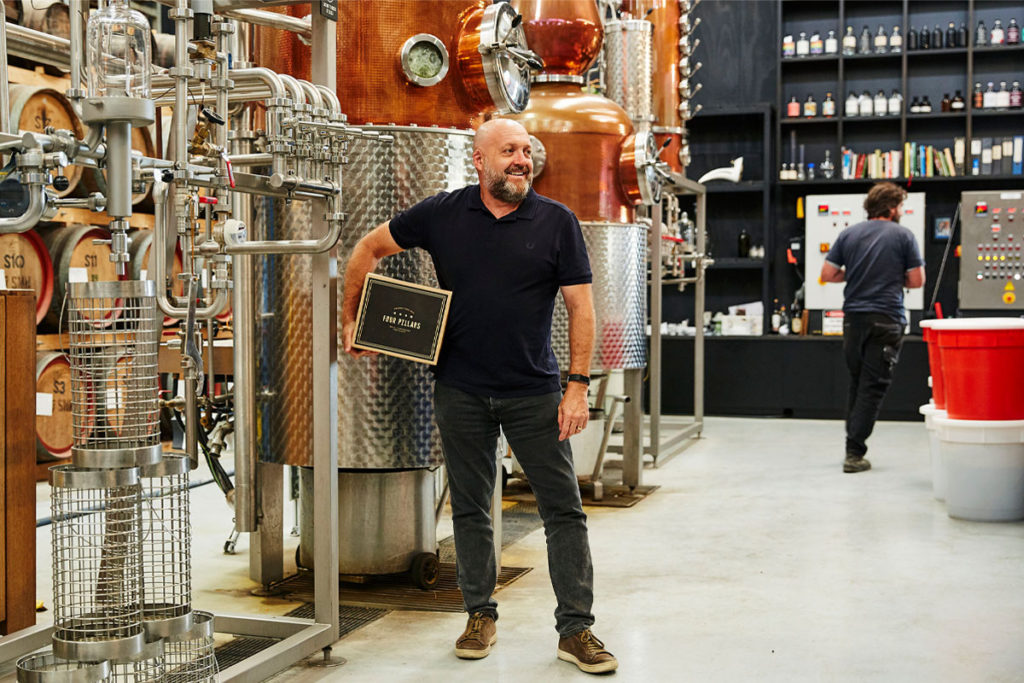 Stu Gregor is an upbeat guy. The rigours of the past 12 months could have been testing for many industries, but the boutique spirits industry is doing okay, according the founder of Four Pillars Gin.

As well as being the manufacturer of awarding winning gins, Gregor wears the hat of the Australian Distillers Association (ADA) president, an industry body that looks after the interests of the smaller, boutique, independent distillers.

The impact of the COVID-19 on the industry has had varying effects depending on where you were located and what part of the business you are in, said Gregor. If a company was in the duty-free sector, which involves travel retail, then it was hit hard. This is also true if a company was in Victoria where lockdowns were commonplace. However, if you had a distillery in Western Australia, there were less lockdowns, and if they were quick off the mark, then they managed to ride the hand
sanitiser wave.

“Western Australian distilleries have had a successful year because they’ve had very little COVID and less restrictions, and therefore areas like Margaret River had some of the best trading conditions of recent times,” said Gregor. “From Easter 2020, we made a lot of hand sanitiser in a very short period of time. It was good cash flow for a lot of businesses who weren’t selling a lot of spirits.

“It showed to me what the distilling industry can do when it comes together. We had a lot of people dropped what they were doing and produced sanitiser.
Some did it because it was the right thing to do and their local communities needed it.”

And while COVID-19 may be a temporary anomaly in terms of having an effect on business – and with vaccinations rolling out over the next 12 months, it should become less of an issue – there is a more permanent thorn in the side of distillers. One that all producers of alcohol-based beverages talk about sooner or later when being interviewed – excise tax.

Turning off the tax tap

Excise tax is a vexed issue, according to Gregor. It is a cash cow that keeps on filling up the government coffers, and it must be hard for any government to let go of such monies coming in. From the health system to roading, it goes a long way to pay for consolidated projects that the government wants completed. Along with fuel and cigarettes, alcohol is a huge contributor to the funds. Distillers pay more than brewers and wineries, but rather than get bogged down in the minutiae of that argument, Gregor would rather the powers-that-be take a longer term view of excise tax collection in the alcohol industry.

“We pay the third highest excise tax in the world, whether that be beer or spirits. That makes it difficult for business to grow and to invest back in Australia, whether they are a local producer or multi-national,” he said. “A highly taxed environment is a hard industry for people to invest in because you don’t make the same rate of return you’d make in a different market or category. It is somewhat stifling the industry, and it would be hugely beneficial if we were able to get some excise relief over the next year or two.

“You’d see big growth in the Australian distilling industry. You’d see more export dollars, you’d see more hospitality. It’s all about a better drinking culture. Craft distilling, whether it is gin, whisky or rum, is playing its part in changing Australia’s drinking culture for the better. I’m not really hopeful the government is listening to us.”

Gregor realises that the government’s argument might be, ‘if it’s such a terrible tax environment, why are there 250 distillers when there were only 30 a few years ago’.

“That is not always an easy argument to progress, but the answer is we want to make sure there are profitable businesses,” he said. “A lot are start-ups that are not necessarily worrying about their profits for a few years while they get going. Over time, you need these companies to be profitable so they employ more people and they reinvest more into the community. You want businesses to be successful and not be on the fringe. They pay more PAYE, more company tax, more GST – it goes on. At some point you just can’t keep on jacking up excise tax. It is not sustainable and the government know that, but I think they are pretty addicted to the excise tax. It is an easy tax to sell to the public.”

And it’s not like it is an easy business to set up. There is the foreknowledge of how to distil a good spirit-based product. Then there is the plant and machinery, and on top of that there is the supply chain and selling of the product once it has been bottled.

“It is a capital intensive industry. To be a member of the association you have to have your own still. Not a contract made under someone else – like a created brand,” said Gregor. “I don’t think you can seriously think about creating a distillery unless you want to sink 100s of 1000s of dollars into it. If you really want to set up seriously, and you want to have a nice store, and a couple of good sales reps, and you want to do some marketing and everything else, you won’t get too much change out
of $1 million.”

What Gregor does see, is that the spirits industry, especially gin, is going extremely well. He believes that is because gin in Australia has a lot of different botanicals going into it, so the different flavours are catching the taste buds of discerning drinkers. That along with the likes of Sullivan Cove Whisky in Tasmania winning international awards, is putting the Australian spirits industry on the world map. But what about the bigger players in the space? In a recent interview with Food & Beverage Industry News, Diageo Australia managing director Angus McPherson, said he thought it was great that local distillers are not only multiplying but making a mark. Gregor agrees – everybody within the industry is supportive of one another. Isn’t it a little peculiar with competing businesses seemingly supporting each other?

“If there are more sustainably successful Australian distilleries out there, the better for us all,” said Gregor. “Diageo has Tanqueray and Gordons gin, which between them have a huge percentage of the market. To me, the more people drinking Tanqueray and Gordons means that they will eventually discover other spirits. Very few people dip their toe in any category at the top – whether it is wine or gin or beer, motor vehicles, technology or whatever. Everybody enters towards the bottom of the market. Your first wine isn’t a Grange, it was probably a four-litre cask.

“We try as a business, and I certainly encourage it across the broader industry, to not disparage your competitors, because apart from everything else, it is not very cool. They’re out there having a go. They’re trying to run their business and keep their staff employed and their family fed. There are obviously some people you like more or like less, but I don’t think it is very cool – especially a young industry like ours where there are a lot of small companies and families – to disparage them.”

As to the future of the industry, Gregor thinks there will be continued growth over the next five years. He doesn’t believe the industry has reached saturation point. He concedes that there might be some attrition along the way, but that there will be a whole lot of new distilleries as well.

“I think there is enormous potential,” he said. “Just look at South Australia. Its government is saying to the spirits industry, ‘we’ve created a wonderful wine industry here, how do we replicate that with the spirit industry?’ I know their Premier is right on board and they are looking at it in terms of having a great wine and spirits industry, and they think it is good tourism play for a state like South Australia.

“The Victorian government is similar. It sees the drinks industry – not just wine – as an opportunity to give people that extra value whether they come to Melbourne or anywhere else. You have to encourage people to go out to the Mornington Peninsula and visit a winery, but you also might visit a gin or whisky distillery.”

Gregor knows the lie of the land for boutique distillers and is under no illusions that it has to compete with the bigger companies to make a dollar. But he is confident that there is enough room for everybody in the market – even newbies just starting out.

“We can’t compete with the multinationals on price, because they have economies of scale 1,000 times what we’ve got,” he said. “But I can compete with them on quality, so I have to ask my customers for a little bit more to buy my stuff, because there is a little bit more craft and little more hand made.  Australia can make the world’s best spirits.”