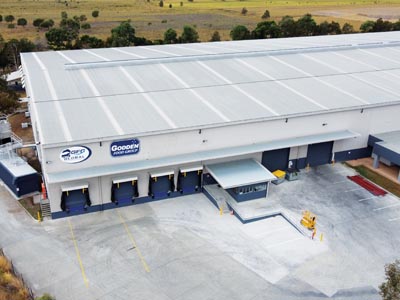 The Godden Food Group is a family-owned and operated wholesale food distribution business located at Ormeau just north of Queensland’s Gold Coast. Godden Foods supplies a range of frozen, chilled, fresh and dry goods to restaurants, caterers and private homes throughout south-east Queensland and northern New South Wales.
In 2019, the lease on the company’s premises came to an end and Jeff Godden, the company’s owner, had to find new premises. Having secured a new home for the business, and also having built a 27,000m3 insulated store, he needed to fit it out with advanced refrigeration equipment, to provide separate rooms for -23°C frozen storage and a chilled area at 2°C-4°C.
The challenge
For Godden foods, the key requirements were to have a safe, cost-effective refrigeration system that would provide sustainable service well into the future. However, Jeff Godden also had another target in mind – he needed the whole project completed to allow him to be fully operational before his initial rent-free period expired.
The GEA solution
Scantec Refrigeration in Murarrie, Queensland is a refrigeration company with 25 years’ experience in supplying advanced industrial and commercial plants throughout the region. Stefan Jensen, one of the founders of the company, recommended Godden use a centralised low-charge ammonia refrigeration system with four GEA Grasso V300 reciprocating compressors. Although Jensen knew that this would not be the option with the lowest capital expenditure, he was certain that it was the best long-term system for his customer.
Read More: Confusion of soft plastic recycling
“I knew that this customer would be able to make huge savings on energy costs,” said Jensen. “But when you tell customers that they can reduce their energy usage by two-thirds, sometimes they don’t believe you. But I was able to present evidence from other projects, so the customer went for the idea.”
Jensen explained that the big benefit of a centralised low-charge ammonia refrigeration system is that it contains very little ammonia, around four to five times lower than a conventional liquid overfeed system.
The presence of high-density liquid refrigerant within the wet suction lines and risers is eliminated. Because pressure drops in wet suction lines are up to 60 times higher than in pure vapour lines, the system runs at lower refrigerant pipeline pressure drops, making it very energy efficient.
“This is where most of the energy saving comes from,” he said.
The GEA Grasso V300 compressors at the heart of the system were suitable for the job. Scantec chose the GEA machines, partly because they were available quickly, but mainly because of their inherent energy efficiency.
“The V300 is an excellent machine and, in my opinion, more efficient than anything else on the market,” said Jensen. “But it’s also one of the very few that does not require water cooling,” he said. “Water cooling typically adds at least $15,000 to the installation cost and is a drain on energy as the water has to be pumped around the system.”
Not requiring water cooling further reduces energy consumption and makes the installation “plug-and-play”, reducing the time involved and giving the company the flexibility to take the plant with them should they need to move again in the future.
The outcome
The new plant at Godden Foods was commissioned in May 2020, coinciding with the start of trading from the new premises. According to Jensen, its Specific Energy Consumption (SEC) is better than anything he’s seen on the market.
“With energy savings of around two-thirds compared with an industry-standard, air-cooled HFC-based system, Godden will get the whole cost of the new plant back in eight years well before the expiry of the 15 year lease period,” he explained. “But if you just consider the marginal additional cost, compared with a freon plant, the payback will be three to four years.”
Maintenance costs for the system will be in the region of two per cent of the initial capital cost annually, lower than equivalent freon systems.
It is also safe. The operating inventory within the freezer is only 1.5kg of ammonia so, even if there was a catastrophic leak, the concentration of ammonia within the refrigerated space would be only around 100 ppm. The IDLH (Immediate Danger to Life and Health) threshold is 300ppm as a comparison.
The result is a new refrigeration plant for Godden foods that is more energy efficient than an equivalent freon system, environmentally sustainable, safe, portable if necessary and, if correctly maintained, will provide 30-40 years of faithful service.
For more information on GEA products, click here.