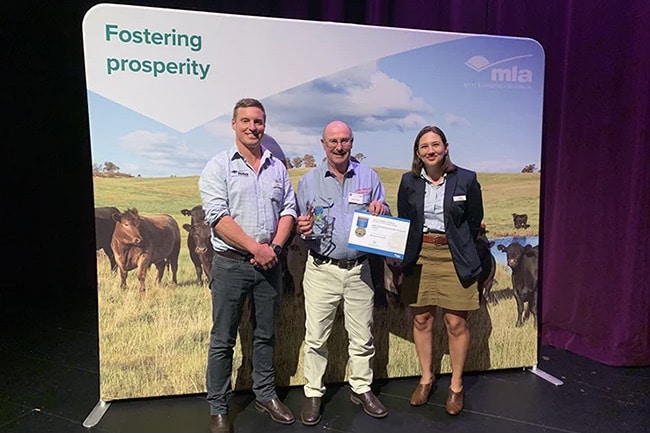 Victorian beef producers were also recognised for their high eating quality performance, as represented by MSA Index results for MSA graded cattle during the 2019-20 and 2020-21 financial years.

This year’s Victorian winners won their respective awards from a field comprising more than 2,600 MSA-registered producers in Victoria who consigned cattle to the program in 2019-21, MSA program manager Dr David Packer said.

“More than 758,000 MSA cattle were consigned from Victoria in 2019-21, representing 11 per cent of all MSA graded cattle in Australia,” Dr Packer said.

“Throughout Australia, more than 15,000 MSA-registered producers consigned over 7.1 million cattle to the MSA program during the 2019-21 period.”

MSA Progress Award for showing the greatest improvement across all feed types in their MSA results was awarded to York Bay, Gunbower.

RM Gillett & Co Pty Ltd, Jalna Feedlot, Anakie, was awarded the Most Outstanding MSA Feedlot in Victoria. Cattle from feedlots under the National Feedlot Accreditation Scheme (NFAS) and are eligible for Australian Grain-fed Standards were also included in this category.

The achievements of MSA-registered producers in Victoria reflected the ongoing improvements they are making to raise the eating quality of their cattle, boost the value of the beef industry and meet customer expectations, Dr Packer said.

“The online myMSA portal is one of the tools available to MSA registered producers to improve the performance of their cattle,” he said.

“The portal allows producers to benchmark the performance of their herd against the regional, state, and national average, and by selecting for different production groups and carcase traits, such as feed type, hormonal growth status, sex, and ossification.”

The MSA system is based on almost 1.2 million taste tests by more than 171,000 consumers from 11 countries and considers all factors which affect eating quality.

To be eligible for the awards, MSA producers must have supplied cattle in the top 50 per cent for that state, and feed type had at least average compliance rate and consigned MSA cattle at least once per year.