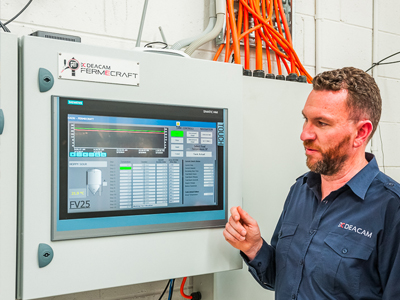 Progress doesn’t discriminate and the shift towards Industry 4.0 in the manufacturing sector is no different. Organisations of all sizes are at a critical juncture regarding planning the future of their manufacturing operations. Businesses in the beverage ndustry need to be supporting the development of technology that can be scaled at each end of the size spectrum to facilitate more consistent production.

One sector benefiting from this shift is the alcohol industry that is seeing a shift in consumer demand towards more craft brewers and micro distilleries. While this is an exciting prospect for the brewers, it brings with it the challenge of small operations needing to be scaled up rapidly. It is crucial that this process is facilitated in a way that doesn’t result in a drop of product quality or consistency.

Kaiju Brewery based out of Dandenong (Victoria) exemplifies how collaboration between original equipment manufacturers (OEM’s) and companies of all sizes can result in clear and concise benefits. Owners Callum and Nat Reeves have partnered with Deacam, an OEM – whose Fermecraft technology has allowed Kaiju to grow at over 100% annually since they began.

Data is at the core of this growth. Through reliable data capture Fermecraft allows brewers to create a consistent product using automation and digitalization of temperature right through the process. Without this, the range of temperature would result in essentially a slightly different tasting beer each time, which isn’t an option when trying to gain a market share in an increasingly competitive industry.

Similarly, the use of Siemens’ cloud based MindSphere platform allows for the data to be contextualised. Kaiju for example, have access to historical data allowing them to identify that ‘golden batch’ that can be replicated going forward.

Director of Deacam – Warren Bradford addressed business leaders at Hannover Messe, the world’s biggest trade show and discussed how innovations in the ‘Internet of Things’ can result in the consistent scaling up of a manufacturer’s operation, without seeing a variation in quality.

Bradford will be exploring this concept when he speaks at Siemens’ Digitalize 2019 in Brisbane on the 23rd of July, delving into Kaiju and Melbourne gin distillers Brogan’s Way as successful examples. He will be seeking to demystify the myth that some companies are too small to afford digital transformation.