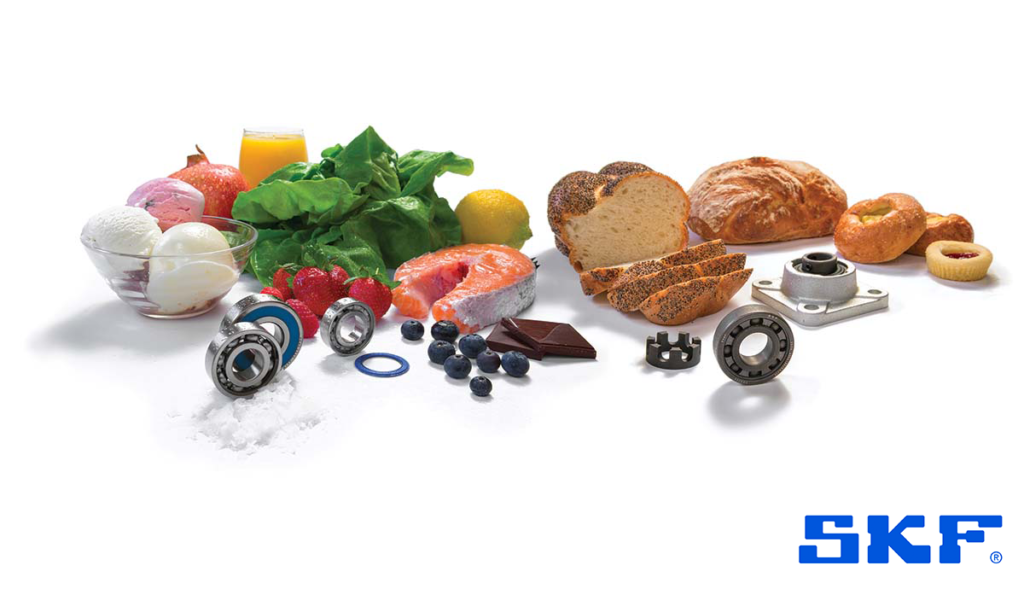 SKF has come up with a solution that not only stops bearings from potentially contaminating production lines, while still offering great performance.

Food safety is a key ingredient when manufacturing food and beverages. Contamination can occur from many unconsidered sources.

Stringent standards are set by the manufacturers, the industry and government, but even these processes don’t guarantee a contaminate-free product rolling off the production line. It is incumbent on all food and beverage manufacturers and processors to make sure they do all they can to make sure the facilities meet hygiene standards.

One issue, unconsidered by many, which has arisen from bearings is that they can contaminate the production lines, albeit accidentally. It was a problem that bothered Eva Otel, who is the global marketing and sustainability manager – food and beverage, for Swedish-based bearing specialist SKF.

While watching her daughter playing a football match Otel struck up a conversation with a microbiologist HACCP inspector. One thing led to another and he ended up giving a presentation to the food industry group within SKF, which led Otel to thinking about how bearings can impact on the hygiene of a food or beverage production line.

“We understood that with high-pressure washdowns, bacteria can spread in the air, and I was very surprised by this. Our bearings are so close to the food line – if you have the conveyor, the bearing is very near that,” she said. “I formulated this hypothesis of ‘what if bearings can contaminate food?’ I made contact with the hygiene and microbiology department at the Research Institutes of Sweden (RISE). We set out a project to measure the amount of bacteria, with a focus on listeria.”

Otel and a few of her team went out to a couple of plants and watched the washdown process, which was thorough. They took some swab tests and bacteria samples before and after washdown. This included in and around the bearings as well as inside the bearings. They delivered the samples to the microbiological institute who did a bacteria count.

“It was very surprising,” said Otel. “In a fish plant they found listeria, which has a mortality rate of 30 per cent for people with lowered immune systems. That is not something anybody wants to find. And, interestingly, the number of bacteria was even higher after washdown in some of the samples.”

What Otel and her team discovered is that while the food zone is washed down hard, open bearings units are not cleaned specifically.

“I can understand why, all the excess grease from re-lubrication of bearings would only make it more difficult,” said Otel.

In addition, cleaning behind the bearing units is not even possible, especially for units that are flash mounted. During the processing time, there are a lot of liquids entering behind the bearing housings – a surface area that never really dries. And wherever there is moisture and residue, the area becomes a ripe environment for bacteria to grow.

“We observed other phenomena that explains why the number of bacteria increased even after washdown. Imagine a conveyor, where there is a gap between the shaft on which the bearing is mounted and the fabric,” said Otel. “When they pressure wash from the other side, you can imagine all those food residues and everything is washed towards the bearing. It’s really a lot of emphasis on the washdown of the plant, but bearings were not given attention, because you go in a plant, after hygienic cleaning – and I have done this – it looks very clean. So you don’t even think about the bearings that often are hidden behind protecting guards.”

These results were instrumental in bringing about the development of the hygienically designed SKF Food Line ball bearing units. The design of these ball bearing units means the back seal of the bearing housing prevents the migration of food particles or liquid, entering into the bearing from the back of the unit. Another feature of the bearing’s back seal – in combination with the base rubber – is that it seals the shaft access point for flanged units completely. This sealability means that food residues do not come in from behind and you don’t have all the liquid draining behind the bearing housing.

Then there is an end cover that is securely locked to make the unit completely enclosed. The bearing unit has the ability to self-drain leaving no water regardless of its orientation. This is because all the surfaces are skewed and have a very smooth surface finish.

And not only that. SKF would not be SKF if not striving for continuously improved performance of its products. In food and beverage, securing the reliability of the bearings – despite the harsh equipment washdowns – is the key for the uptime of the equipment that does all the hard yards; the filling lines, conveyor belts and packing machines.

A young Italian product development manager, Fabio Falaschi, came up with the solution. It was one thing to create a bearing that is fully enclosed, but another to figure out how to stop cleaning media entering the bearing cavity, which sooner or later emulsifies the grease inside and is often the root cause of failures.

“Traditionally, designers put more lips on the bearing seals for extra protection against high-pressure washdowns, but this still isn’t effective in time, considering the re-greasing to purge maintenance practices. What Fabio said was, ‘why are we trying to fight what we cannot fight?’,” said Otel. “He said, let’s work with the cleaning fluids and not against it. He saw a rain gutter and he got a concept, which also encompassed using gravity.”

“Just like a rain gutter can collect water why not collect cleaning media and allow it to exit securely?” said Falaschi. “There is an upper lip on the casing that stops most of the cleaning media entering the bearing. However, some of the cleaning media will get in. The other gutter lips within the bearing casing allow the other media to exit the bearing at the bottom of the housing due to gravity. This removes all risk of water and detergent getting near the sealing lip and protects the integrity of the bearing grease, which means increased bearing life.”

Since these new bearing units are revolutionary in providing increased reliability in typical industry processing and cleaning environments, maintenance managers are impressed. They also appreciate that they do not need to re-lubricate them, saving time and cost.

However, what SKF has seen is that food safety and quality managers love them even more. When they understand the risks to food safety that conventional bearing units pose, they push for implementing the SKF unit in their production facility.

In addition to the fact that these hygienically designed units are better cleaned, they can also save up to 33 per cent in cleaning water, with the additional benefit of no bacteria contaminated excess grease washed away into the wastewater stream.

“Even if maintenance is not responsible for the environment and sustainability, they have cascaded KPIs so they need to prove energy and water savings,” said Otel.

“Maintenance people are after reliability. Operation and maintenance are often ‘fighting’ over the availability of a line. Maintenance wants more time for maintenance, and operations want to use it more. The more time saved from not needing to re-grease the bearings, or change them to prevent unplanned downtime, the more time operations have to increase production output.”

Otel knows that at the end of the day, what’s important in the food and beverage industry is food safety, line reliability and more uptime for production, while proving environmental care and sustainability. And this is all what SKF’s new Food Line bearing units impact.