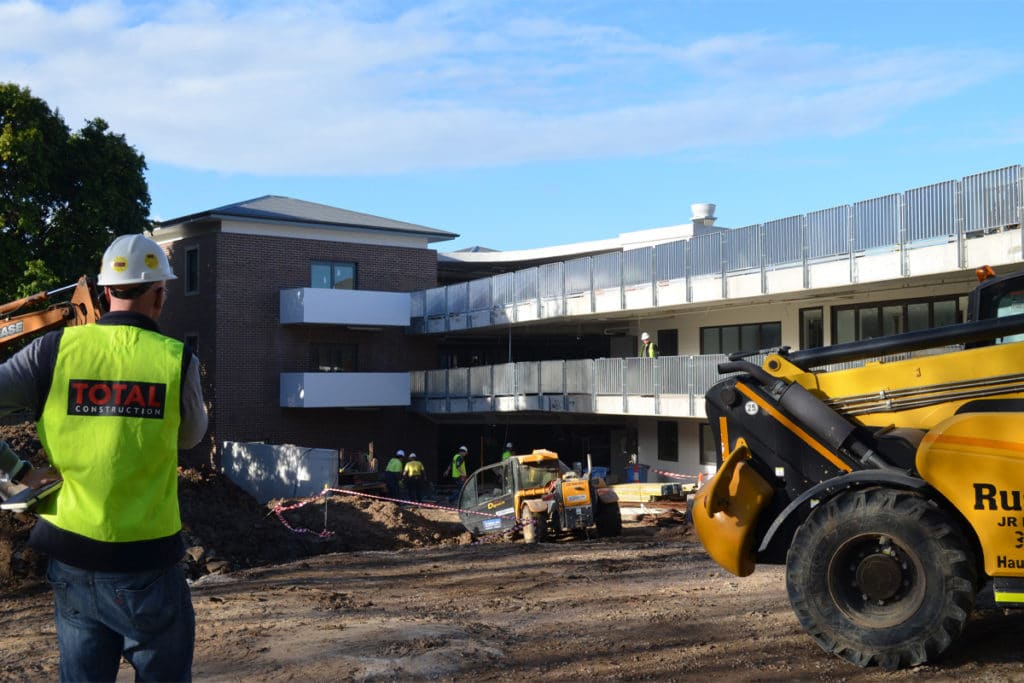 Federal Safety Commissioner (FSC) accreditation makes sense from a worker safety point of view, but also means companies have greater opportunities to tender federally funded projects. These are the two main reasons Total Construction sought, and got, the accreditation, according to CEO Jeff Jones. He sees it as a ‘significant investment’ in helping mature the company’s systems while also having a positive real-world impact on workers’ lives by ensuring their safety.

“It fits culturally with what our business is all about, but it also fits with making sure that the market segments that we focus on, we are fully qualified to work in,” said Jones.

Any company that obtains federal funding is now required to use construction companies and contractors that have an FSC accreditation. While that is good news for Total Construction’s bottom line, it wasn’t the driving force behind the company’s application.

“Our main objective of getting this has not been to source federally funded projects, it has actually been to improve safety culture and quality culture within our business, and it’s a high level of accreditation,” said Jeff.

“The secondary reason, as an added benefit, will be opening up some channels of business opportunities. Whether it be defence work or other federally funded opportunities that occur. But, first and foremost, it was about improving the risk mitigation and returning people home safe from our jobs.”

The company is already ISO accredited to quality, safety and environmental, so the accreditation that it previously had was the international standard for those, according to Jones.

“As well as a NSW government safety accreditation scheme, which is not very dissimilar to the ISO, we had those qualifications, this is certainly above and beyond that,” said Jones. “There’s a very different feel about this accreditation. Our previous ones were very much about compliance, whereas this one is about discipline and culture.”

The previous systems and safeguards in place were seemingly more about a set of regulations on what needed to be done a daily basis – more reactive than proactive.

“This takes it a little bit further and starts to really take a more proactive view to risk on the sites. It does start to work towards quality as well. So proactively assessing the risks on a job before we start,” said Jones.

Jones said they were able to adopt the new style with relative ease because Total Construction’s safety strategies mirrored the new system in many ways.

“What this accreditation does is make you do a lot more planning and workshopping around the risk on a job before we start. This accreditation does not enable you to sort out issues as they arise, you basically have to plan and sit down and almost design out any risks on the job,” said Jones.

“For instance, handling materials from heights, scaffolding or whatever else it’s going to be, the first thing to do is ask what we can do to remove those risks and not just what are we going to put in place.

“It then naturally forces the business to think about quality risk and start to say, ‘if I am planning all the safety risk, what are the quality risk issues?’ This includes things like wet areas or food hygiene. What preplanning can we do rather than developing the design criteria as we deliver the job?”

The new process has allowed the company to frontload its planning and switch focus before starting on a new job.

“The other element is the requirement that if federal funding is provided for a construction project … then the contractors have to have a high level of safety accreditation,” said Jones.

“We have seen a couple of situations where projects across a number of industries received a grant or funding and then at the very last moment realised that the contractor they were working with wasn’t accredited, which actually voided the funding application.”

With this new FSC accreditation clients and contractors have a clearer pathway to funding and subsequent building approval.

“We know it fast tracks the funding application because it’s a big requirement with the funding that the delivery of the job will be done in this fashion. Without doubt it removes last minute hurdles for the applications of funding and allows the project to commence,” said Jones.

“A lot of it comes down to the individual applying and whether or not they qualify, so we don’t see that as much. I use the bushfire relief as an example –  you had to reach certain criteria to apply for that fund.

“There’s no doubt it does put you on the back foot if you don’t have an accredited contractor ready in the design phase of the project.”

The accreditation process is not an easy one and in some ways is designed to be intentionally difficult to obtain as a means of raising industry safety standards across the board.

“After spending the time and effort we did to get the accreditation there’s no doubt the achievement is not an easy thing to get, and then it becomes a bit infectious within your business. What other types of things should follow the same type of process?” said Jones.

“(The process) was very arduous. It is a bit like the Australian cricket team, it’s hard to get in but once you get in, it’s not that easy to get out.

“We actually went through nine months of auditing and reviews, resubmissions, action plans, you have to give a live example of how you’re adopting the system on current projects. It’s a very thorough, and for that matter, a very valued exercise.”

Jones said one of the requirements for accreditation was something Total Construction had already implemented.

“Where we felt that we adopted or adhered to the requirements quite easily was in our selection of sub-contractors to work with. Instrumental in having a safe site is working with a safe, conscious supply chain,” he said.

“Part of the preselection of our sub-contractors and suppliers is that they do have performance aligned with our safety and quality requirements. We understand that this accreditation really puts the onus on making sure that the buck stops with the head contractor about assessing risks on the site.”

While fully compliant in previous systems Jones said Total Construction was more than happy to jump onboard with the new method, which seemed to address some shortfalls in the industry.

“It flips from compliance to discipline, and what I mean by that is they used to be almost like parking police in making sure that everyone was doing what they said they would do. Now, it’s more about the session being run around how can we support you culturally and who has the right attitude and approaches to safety,” said Jones.

“It very much changes the role of those individuals. They’ve actually said they enjoy their roles better now. It’s a far more enjoyable role supporting the adoption of this new system rather than trying to issue out parking tickets for the old one.”

Another key benefit to the new accreditation scheme is the potential to weed out any long-standing quality and safety issues within the industry.

“There’s no doubt it has to iron out any poor practices because you won’t retain the accreditation if you don’t. The rules under the scheme are you have to be accredited before tendering for a new job,” said Jones.

“It’ll only be for future work which is why it’s a good investment. I don’t think we would have ventured down the application path if we didn’t feel that we had the investment in our dedicated safety resources in place already.

“We know the benchmark in the industry is at the higher end so we’ve already got support internally to adopt these new principles. It should also create a greater interaction between those resources and the projects because they will require that support.”

Total Construction’s Executive Committee, which already helps to oversee safety compliance prior to the FSC accreditation, will also see its role evolve.

“Even though we have executive involvement in safety to a degree, it’s now actually a specific requirement of the accreditation that separate inspections are done by executive management on site and documented,” said Jones.

“And demonstrating all the way up to the board that safety is a focus within the business and has the right amount of duration in each meeting.

“It’s one of the few compliance elements of the accreditation that you have to demonstrate executive involvement in safety. Not to suggest that it shouldn’t or doesn’t exist but it’s a very specific requirement for accreditation.”

Jones said the accreditation requirements also align with one of the main tenants shared within Total Construction, while having little to no impact on overheads.

“The words we have been using are plan, prepare, proceed. Plan whatever the risk is, prepare for it and the process, rather than just proceed. It shouldn’t create more expense,” said Jones.

“It’s now up to the business development guys to start digging around for jobs that may well source federal funding and then seeing what we can do to assist our clients in applying for that money.”