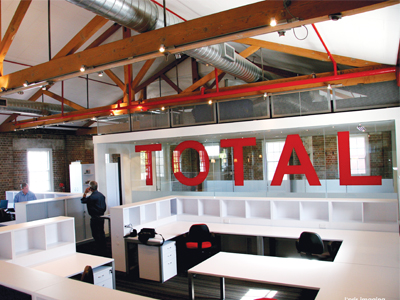 One is quiet, the other gregarious. One is the numbers man, the other the details guy. One is an introvert, the other an extrovert. They are an unlikely duo, but over the past 25 years Steve Taylor and Bill Franks have taken a one-man band that is Total Construction and turned into a company that is turning over hundreds of millions of dollars a year.

Specialising in self-storage, food and beverage, and aged care facilities, the company has navigated its way through the GFC, the odd grumpy client, and government bureaucracies to find their niche in what can be a very competitive market.

“We are complete opposites,” acknowledged Taylor. “Bill has never smoked or drank and partied hard, whereas I have taken all those things to the extreme. I live in the city and Bill lives in the mountains in Kurrajong. He lives on 35 acres and I live on 400sqm. We’re very different, but it works.”

Talking to them in the board room of the company’s beautifully detailed head office in Strathfield in Sydney’s inner west, you can hear the mutual respect when they speak about each other, and the pride with not only how they have built their business, but how they do business.

Taylor does most of the talking, and Franks doesn’t seem to mind. They met almost 30 years ago working for Donnelly Construction, based in Castle Hill in Sydney’s north west.
“We were building a school together up at Castle Hill and Bill was the foreman and I was the leading hand on the job,” said Taylor. “After work we’d take off in his ute to Wilberforce and build his house.”

Taylor then got an opportunity in his early years to work as a project manager under Nev Kennard, he of the hire and self-storage fame. The out-of-the-box-thinking Kennard gave the young Taylor a few insights into not only how to run a business, but how not be satisfied with second best. Franks had already left Donnelly’s and started his own company. Taylor quickly wrangled in Franks to become a subcontractor to him to help build Kennard’s facilities.

“That was when I had a building job in Wetherill Park and Kennards came to us and said, ‘Don’t take any more work on, we’re going to keep you busy for the next couple of years’,” said Franks. “Then the recession hit, and then Nev said there was no more work.”
“Nev predicted the recession. He was a visionary,” said Taylor. “He was a very forward thinking, entrepreneurial guy. That’s who I learned my business acumen from. He taught me to challenge everything. I was the sort of person that when they said, ‘Think outside the square’, I didn’t even see the square. I learned from him how to question and challenge everything with respect.” When the 1989 recession hit, Taylor went up to Cairns and then came back to Sydney to help run a joint venture for Kennards. Franks kept his business ticking over by helping out the hire/storage company when he could.

“I kept on doing maintenance and building work for Kennards during that whole recession period,” said Franks.

It was while Taylor was on a sabbatical that the idea of Total Construction really came into fruition.

“When I was in Europe, Bill saw that Nev was getting ready to take off again workwise,” said Taylor. “They thought they might start a company but would need me to run it. But I was having too good of a time in Europe. I was having the time of my life and didn’t want to come home. The reports from my dad were that the economy still wasn’t that great, so there was no need to rush home. Bill was badgering my dad about when I was coming back.”

“It was that 93/94 era. I always thought we should start a proper company,” said Franks. “We picked up a job for Rheem water heaters and we built their R&D lab.”

And how did what was literally a two-person operation come to be a company that now has 150 full-time staff and up to 400-500 sub-contractors working for it at any one time? According to Taylor, there was a moment in time when it all came together, and he took a punt.

“In 1994 Sam Kennard took over as CEO of Kennard Self Storage,” said Taylor. “He used to work for me when I ran his dad’s business. He was at university and used to work part time for me. Sam approached me to do some work. I’ll never forget him turning up at my office – I hadn’t seen him for a couple of years. My eyes lit up and the entrepreneurial spirit – which I didn’t know I had – went spinning into overdrive. They had a site in Goldburn. They invited me to go there. And I was just a young guy – 27/28 years old – and I knew a bit about business, but I was just a carpenter. They drove me down to the Goldburn site and they said, ‘What do you think?’ I said, ‘You can do this, this and this.’ We got in the car and drove back. And while on our way, a little voice in my head said, ‘This is a make or break moment’. So, I said to them, ‘I’ve got a new business – how about we become your in-house contractor? We’d still be a sub-contractor but manage all your in-house properties’.
By the time we got back to Campbelltown we had a deal that unfolded 10 years’ worth of work. We then went and built the building for them for $1.2 million and 16 weeks later it was open.”

But their story isn’t just about taking a punt and luck, it was also about playing to their strengths.

“From the beginning, we decided that we weren’t going to be a residential builder because we knew it was a boom or bust industry,” said Taylor. “You have to have a crystal ball to know when the boom is going to happen. There is money in apartments if you are a developer, not a builder. That’s my theory. And to do residential you really have to deal with developers.” You get the impression from Taylor that developers are not his favourite people.

Another aspect to their success, they say, is how they treat their staff, not just in terms of remuneration, but in their development, too. Taylor believes that this is one of the reasons they get so much return business – their staff are invested in the outcome, just as much as he and Franks. Both men also believe a lot of their success is down to knowing the market and putting the right processes in place to make sure the business runs smoothly, and that staff are looked after.

“We have a cadet program and the KPI on that is that 10 percent of our workforce is cadets,” he said. “We’re just under that at the moment because some of them have just graduated. They’re still working for us, but they’ve just been promoted. That is a big mentorship. Every one of our staff here has free membership with Fitness First nationally. It costs us over $100,000 a year, but it means we get our staff visiting the gym 200 times a year.”

Plus, their attitude is different. Franks said it is all about respecting the customer. Something that not all companies think of. To some, it is about the here and now, and immediate results, without looking for the long-term prospects.

“Our KPI of return business is 75 per cent and we smash it every year,” said Taylor. “We had a lot of people come from the Tier One companies, and they’re not taught how to get repeat business. It’s ‘screw the client at all costs’. We needed to teach people that there is trust within the industry.”

Another aspect of the business is transparency. Both men are up front with their staff on the turnover and how much a project costs. They find that because they are talking 10s and sometimes 100s of millions of dollars in turnover, people think they are rolling in money. But people don’t seem to understand that there are lot of outgoings in such a big operation. Once Taylor and Franks put the project plan in front of their workers, it soon becomes apparent that neither will be challenging Jeff Bezos for the richest man in the world stakes. Transparency aside, being up front also creates trust that they are all in it together.

“When you’re pushing staff to give you transparency then we should be transparent, too,” said Taylor. “I tell them how we run the business and then they feel engaged because we are being transparent, and they are frank with us about the parts of the business they work in. People think you are a money-making machine; that’s because you turn over $200 million a year you must be a multi-millionaire. Transparency gives our employees a reality check.”

And when it comes to the business itself, there is a reason it is called Total Construction. It epitomises what the company has to offer, according to Taylor.

“We wanted to show a point of difference” he said. “For example, when it comes to our food and beverage division, we have an in-house engineering capability, as well as an in-house infrastructure business. Automatically, you are showing clients that you are a business that is diverse, that is thinking, that is capable. You’re not just a tendering machine in the construction industry. You can bring value.”

Both Franks and Taylor have brought the members of their respective families into the fold. Not that either man is looking to retire any time soon. But it’s comforting to see the next generation of Taylors and Franks showing interest in a business both men have built from the ground up.

“We’ve both got family in the business now,” said Taylor. “It’s owned by the two of us and our families. We see ourselves bringing more family in and maybe handing it on, but we don’t know yet. Bill and I are both young for our age and we think we’ll be here for a while yet, but maybe in a lesser capacity.”

And the key to their continual success and partnership? Taylor sums it up in two short sentences.

“We trust each other. Bill’s always been there for me through good times and bad and vice versa.”