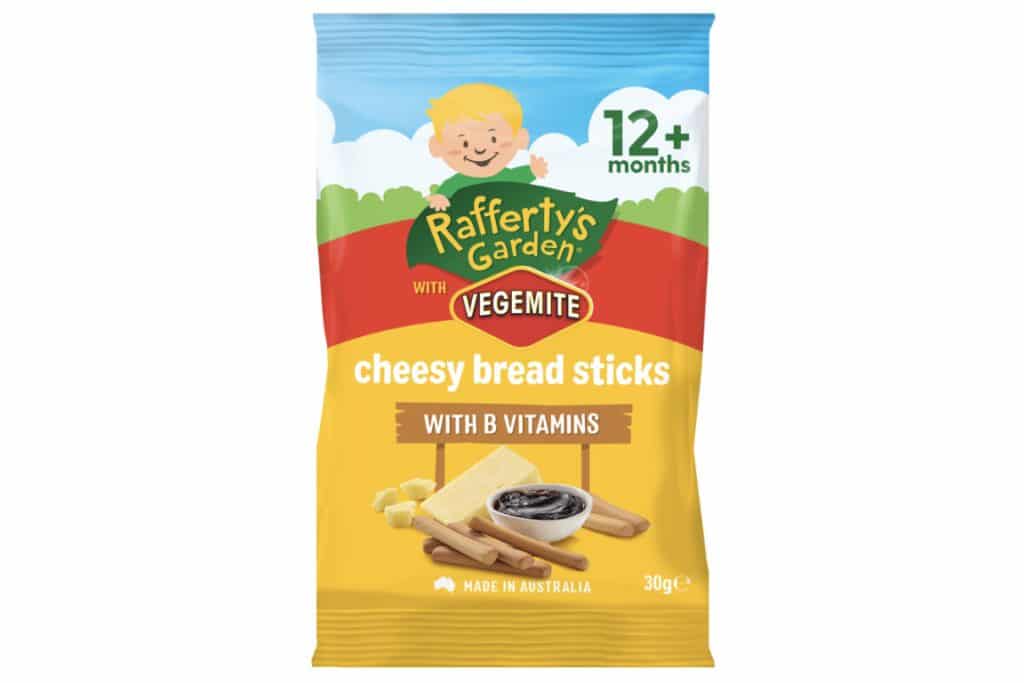 Renowned for its puree pouches that are made in Australia, baby food brand Rafferty’s Garden has teamed up with Vegemite to reveal a twist on a new snack, available now on supermarket shelves nationwide.

Rafferty’s Garden has just launched Vegemite Cheesy Bread Sticks, a snack for toddlers 12 months and over. Made with Vegemite, this delicious snack is a category-first flavour profile containing vitamin B and prebiotics, designed to help introduce the taste of Australia to little mouths.

Children’s nutritionist and founder of Good Little Eaters, Shelley Judge, said the new Vegemite Cheesy Bread Sticks are the perfect addition to the pantry and nappy bag as an occasional snack food for toddlers.

“My philosophy is big on introducing packaged snacks in conjunction with a balanced diet from an early age to help develop a healthy relationship with them, and these are a great nutritious option for young kids to start with packaged snacks,” Judge said.

“More importantly, the sodium levels in the Vegemite Cheesy Bread Sticks are within a suitable range for an occasional baby food snack, in accordance with the Australian Dietary Guidelines for children between one and five years old, and with added B vitamins, it supports a balanced, nutritional diet for children 12 months and over.”

Rafferty’s Garden senior brand manager, Georgia Alvarez-Witts, said the brand explored many flavours and combinations before they landed on one of Australia’s most-loved kitchen pantry staples as the perfect pairing.

“We know parents, guardians and carers go through an array of experiences when introducing new foods to children come meal and snack time – be it good and bad! Vegemite was a flavour not yet explored in the baby food snack category; however, history shows it’s loved wholeheartedly by Aussies,” she said.

“With this new snack range, your child’s first taste of VEGEMITE can encourage self-feeding (as it’s perfect for little hands) and also give them a chance to expand their flavour preferences as they progress to more solid foods.”

Vegemite marketing manager, Jacqui Roth, said they are excited to be working with Rafferty’s Garden to engage Happy Little Vegemites to give them the first taste of their mitey product, Vegemite.

“Next year marks Vegemite’s 100th birthday and we can’t wait for the next generation of Vegemite lovers to enjoy the product for centuries to come! What better way to introduce Vegemite to little mouths than through a Vegemite Cheesy Bread Stick,” Roth said.