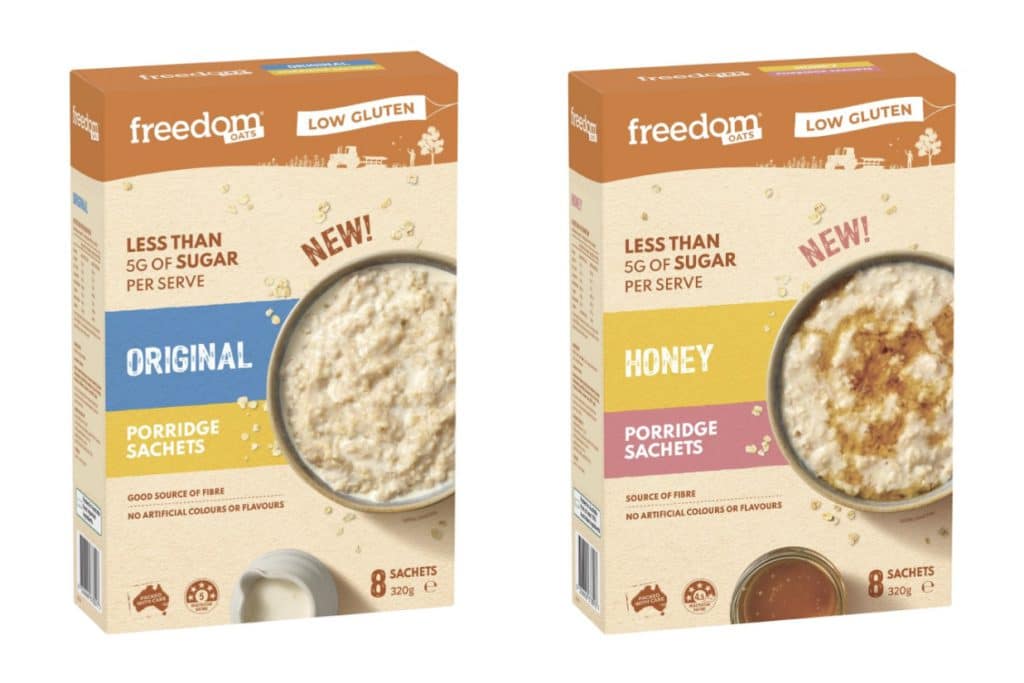 Good Food Partners (GFP) has launched a range of low gluten oat porridges, set to appeal to the one in four Australians avoiding gluten for a variety of reasons.

The two varieties, Original and Honey Porridge are low in gluten and naturally sweet with less than 5g of sugar per serve, they are dairy free and have health star ratings of 5 and 4.5 respectively. They are packaged in fully kerbside recyclable portion-controlled sachets, and packaged at the GFP site in Scoresby, Victoria.

Honi Cervi, general manager Innovation and Growth for GFP, said the business was proud to offer more choice to their consumers, and those consumers shopping in the mainstream cereal aisle in the form of a healthier porridge alternative.

“There was a real gap in the market when it came to low gluten, mainstream oat options, and at the same time we identified a growing demand from consumers with varied levels of intolerance or those avoiding gluten for lifestyle reasons,” Cervi said.

Arnott’s Group nutritionist, Alison Baldwin, said the range is a unique offering for low gluten consumers, or those interested in low gluten products.

“The range has zero nasties and still tastes great,” she said. “The nourishing ingredients are a source of fibre, they have less than 5g of sugar per serve and no artificial colours or flavours, making them a fantastic breakfast option with strong health credentials.”

The new range is labelled “low gluten” to comply with Australian regulations. Across the UK, Europe and the US, similar products containing less than 20 parts per millions of gluten are considered “gluten free.”

Freedom Foods maintains a strict supply chain to ensure minimal contamination of other gluten containing cereals and grains. The field itself is meticulously maintained to remove any other cereal plants, while machines and equipment are checked and tested throughout the process to ensure they are free from any other traces of gluten containing cereals. The supply chain also includes having separate transportation and drivers, as well as a having a dedicated mill for low gluten oats.

The oats themselves are tested throughout the stages of production to ensure they maintain low gluten status.

Whilst the range is not suitable for those who are coeliac, it is well-suited for consumers with other varied levels of gluten intolerance or those avoiding gluten for lifestyle reasons.

Freedom Oats will be available in the breakfast aisle in Coles from late April, and in the health food aisle at independent supermarkets from May.

*NOTE: The Arnott’s Group acquired the cereals and snacks division of Freedom Foods, and together with Diver Foods, created Good Food Partners.